Why is Church Giving Difficult and Three Ways to Encourage Giving

Our friends over at Simplify Church Bookkeeping wrote a post detailing the 5 Stages of Generosity in Your Church.

Why is giving so hard?

Giving is an Act of Worship

Christ has commanded us to give back from the resources He has provided to us. The tithe as we call it or one-tenth of the resource is to be brought back to the storehouse (the church) to be used for the functioning of the church.

Why then does that not happen?

The spiritual discipline of giving has to be cultivated and taught.

This is especially true if your reaching an un-churched, de-churched or anti-church community. What I mean by that is a community of people that either have no background in church so they were never brought up to know about giving, tithing or what church is all about. The second group is those people that once attended chruch but for some reason or another they have strayed away. These are folks that maybe grew up in the church and either were hurt or didn’t take ownership of their faith to find value in it later one. The final group are those that don’t care for the church and are against what it stands for.

In all three, you will have a very difficult time with finances in your church.

That being said, here are three ways you can encourage giving in your church.

1. Talk about giving and don’t make it weird.

For some reason, the subjects of money and sex have become taboo in our local churches. It probably has many reasons but I’ll contend that money is one of those areas that we just don’t like to talk about. Pastors are fearful to discuss it or preach about it for fear they will offend the people who are already supporting the church. Secondly, I think pastor’s are discouraged by some leaders from teaching because those leaders don’t want to be held accountable for their lack of giving.

You’d be surprised when running a giving report to find some of your most faithful leaders and the ones who give the least.

Don’t be fearful to talk about giving. Preach about it. Make it a normal practice. Take time to give precedence to the offering time of your worship service and don’t minimize it by doing announcements from the stage.

What makes talking about church weird is when pastors don’t make it a regular part of their ministry.

Giving is a spiritual discipline for Christians

Encourage those that are giving for the first time. Write them a thank you note.

Encourage those who are faithful givers. Send quarterly giving statements with a thank you note sharing the ministry successes you’ve had during the previous time period.

Get people realizing that My Giving = Ministry Happening

Identify those people who’s giving trend has changed and reach out to them. Don’t be weird and mention that you noticed their giving has changed, but give them a call and check in. You’ll be surprised what flags are thrown up just by a person changing their giving.

3. Make it Simple and Easy to Give

In our modern society, I am always amazed at the churches that aren’t offering a way for people to give electronically.

I will agree there are many arguments for and against the practice, however, I believe we’ve reached a point where our economy has evolved to where a digital transaction is far more convenient and sometimes safer than a paper transaction. In many cases, it’s cheaper to give electronically as well.

If you’re reaching young families, or millennials, you have to have an online giving option for your church. Chances are, very few of them are carrying their checkbook regularly and in many cases I’d bet they don’t even know where the check book is.

Many studies have been done proving that churches are seeing in increase in giving when they have an electronic church giving option. It just makes sense.

We’ve made church online giving simple and easy for your church. Find out how we can help your church encourage and increase giving using SimplifyGive. 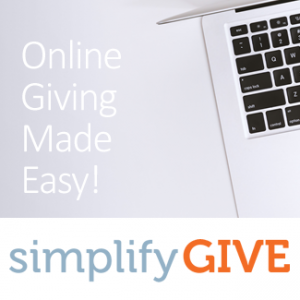